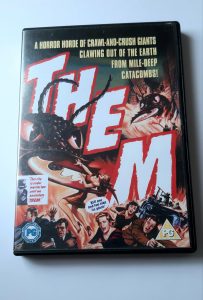 a film recap in approximately 429 words

The first ‘Big Bug’ movie ever made. The movie that kick-started the idea of radioactive creatures.

One wrecked trailer and a spilled box of sugar cubelets.

No money was taken.

A terrible sound in the desert. A terrible mark in the sand.

One wrecked store. Gramps Johnson dead in the basement.

No money was taken.

A big pile of sugar and many, many small ants.

A terrible sound in the desert. A terrible man-scream.

One missing cop and “indications of a homicidal maniac.”

One FBI Agent. Lots of evidence but nothing adds up. Gramp’s body has enough formic acid in it to kill 20 men.

One 10” waist. Four pair of bug-eyed goggles to protect against sandstorms.

One risk of nationwide panic.

One giant ant mound seen from the air.

Two skulls, a pile of bones, one rib cage and the missing cop’s belt.

One ant nest diagram, “note the wonderful and intricate engineering.”

Down the ant hole. Dead ants all over the place, spit and a crumbling rock wall. Two escaped Queen ants.

Dr. Medford, “we haven’t seen the end of Them, but we’ve only had a close view of what may be the end of us.”

Sign in army HQ – Monitor all news for (most notable):

Los Angeles is under martial law. Army in the storm drains.

Dr. Medford, “when man entered the atomic age he opened the door to a new world. What we will eventually find in that new world, nobody can predict.”

No lady in a red dress and high heels is killed by an ant in this film.

I do not recall anyone saying ‘kill one and two take its place!’ in this film, although I could be wrong.